In this latest collaboration with The National Museum of the American Coverlet, Windham Fabrics is proud to offer 25 exciting new prints.   The colorful and graphic patterns are inspired by traditional motifs seen in the nineteenth-century woven coverlets (bedcovers) in the Museum collection.

Coverlets in both geometric and figured patterns were widely popular during the early to mid 1800s. Before mill-run yarns and synthetic dyes became available, coverlets consisted of hand-spun and naturally dyed yarns, usually cotton and wool. Coverlets were made by both women and men, working on handlooms. Geometric coverlets were usually produced by women for their own use, while coverlets with figured (realistic) patterns were made by men as a profession. (If you see a woman's name on a figured coverlet, it was made for her rather than by her.)

Many coverlets bear inscriptions. They can include the weaver's name and/or location, the date, the owner's name, or perhaps a slogan. The name of this exciting new Windham line is taken directly from a Midwestern coverlet, made around 1840, bearing the inscription THE FARMER FANCY. Its centerfield depicts a charming, folksy farming scene.

Some coverlets include trademarks. One of the most well-known is a lion used in the 1830s by New York weaver Harry Tyler. Today his coverlets are among the most popular with collectors and indeed Tyler's lion appears in one of the new prints.

THE FARMER FANCY collection makes full use of motifs both large and small, all of which coordinate beautifully for use in any project.

Windham's partnership with The National Museum of the American Coverlet helps to promote the Museum's mission of inspiring and educating the public about these uniquely American textiles.

Coverlet collection fabrics made exclusively by Windham are the only prints officially licensed by The National Museum of the American Coverlet. A portion of the income from the sale of THE FARMER FANCY Collection goes to support the Museum. For more information about coverlets and the Museum, please visit www.coverletmuseum.org 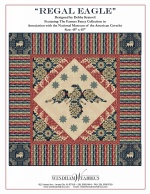 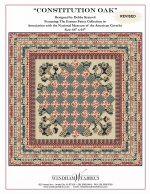 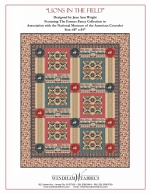 Lions In The Field
by Jean Ann Wright 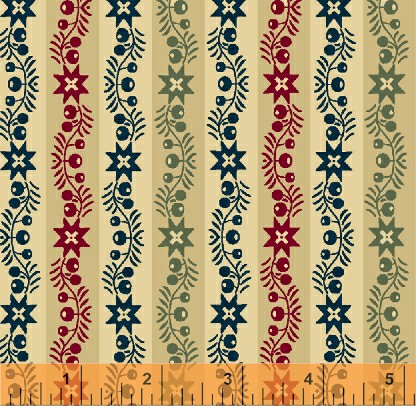